A joint project with Artemisia annua.

The Chinese medicinal plant Artemisia annua has been successfully used for centuries to treat inflammatory processes and febrile infections including malaria. Its cultivation as part of the seed work of the HORTUS OFFICINARUM association was suggested by a general practitioner who prescribes the plant to patients with rheumatic pain. Since herbs and tablets from the trade are sometimes of questionable quality, he became interested in products from bio-dynamically cultivated plants.

By the time the plants were growing in the field, the Corona flu had been declared a pandemic and we learned that Artemisia annua could possibly be used therapeutically here because of its antimicrobial, antiviral and immunoregulatory properties. During an initial exchange, a group of doctors showed vital interest in the plant, which was followed by regular joint field visits, tea tastings and in-depth discussions.

We sowed seeds of six different origins. These variants of the same botanical species developed extremely differently. The young plants from two origins were clearly more erect - under the same conditions - than the third, where the plants were still close to the ground for weeks during the development of their rosette (see Fig. 1, left). The light, yellowish green leaves of the first group stood out against the dark, almost blue-green foliage of the second.

The light green plants strove upwards and branched vigorously. We expected flower buds on the finely chiselled shoot tips as early as July but it was not until September that small green nodules appeared promptly releasing clouds of pollen from tiny flowers. This development took place much more slowly in the darker green plants. They too grew over two metres high, stretching out bushy, mighty, densely leafed branches, but we did not see the first flowers until mid-October and only on about a third of the plants. By this time, the plants of the variant that had first been seized by the flowering impulse had already mostly died out.

The different origins and the preparations made from them were compared amongst the group and the different qualities of the types with regard to their therapeutic application were worked out and are currently being tested. The fact that such serious differences in the interplay of vegetative and generative forces can occur within a species shows firstly that the seed origin plays an essential role in the quality of the herbal remedies and secondly, that cooperation between doctors, pharmacists and breeders is of great importance for therapeutic action. 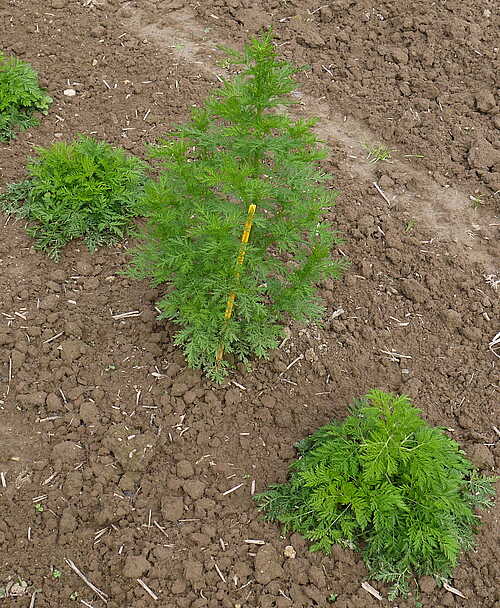 Planted under the same conditions – big differences in the young plants 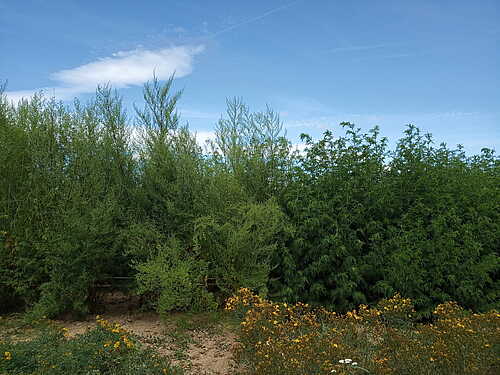 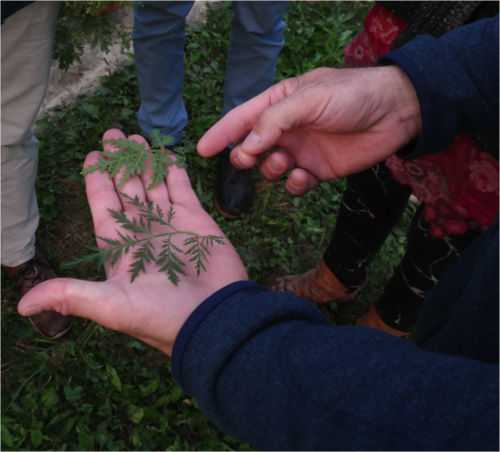 Different leaf shapes of the two Artemisia types
Back