Free will and brain physiology

Neurophysiological research today is increasingly in search of an empirical mediation between conscious inner perception and physiological measurement. Motivated by their concern to introduce human will into the scientific discussion, or to empirically question free will, Kornhuber and Deecke (1965) and, somewhat later, Libet (1983) had already initiated the debate on the so-called readiness potential. Libet provided experimental facts that - contrary to his own conviction - could be used as arguments against freedom of will, and that has been a challenge to its recognition ever since.

The concern of this project is to empirically challenge the interpretation of Libet's results that speaks against the possibility of free will. The fact that the question of free will cannot be meaningfully addressed in Libet's experimental design, in which no recognised reason leads to an action but instead waits until a "drive" asserts itself in consciousness, has already been largely acknowledged. However, there is still no reliable, published research on the content of the mental correlate of the readiness potential (the internally experienced states that take place in the course of the development of the potential) and no conclusive alternative. In accordance with Goethe's research approach, we want to compensate for the specialisation of Libet's experiment by varying the experimental conditions and providing a more comprehensive approach to the phenomenon.

The aim of the project is primarily the empirical specification of the mental correlate to the readiness potential and secondarily a clarification of the connection with free will. For this, we rely on the EEG and the decision moments reported by test persons. The test instructions given to the subjects guide the interpretation of the data. The aim is to cover as broad a spectrum as possible of movement decisions at different levels of consciousness. The hypothesis is that the mental correlate of the readiness potential consists of different components associated with different neurophysiological imprints.

The publication of the results is intended to provide a bridge for a further project in the future. To this end, two new staff members, Tiffany Huber (neuroscience) and Carolin Schürer (physics), joined the project in autumn 2020. With their help, the application required for publication was submitted to the ethics committee, the project was approved by them and the statistical analysis could begin.

In the spirit of Rudolf Steiner's “Philosophy of Freedom” and its subtitle “Mental Observation Results by Scientific Method”, we want to contribute our research to the conceptualisation in the new scientific territory of conscious inner observation. 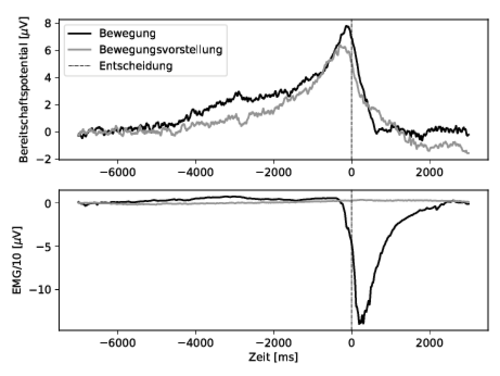 Readiness potential (top) and EMG signal (bottom) for an actually executed movement (black) and an only imagined movement without execution (grey).
Back