In a modest cottage in the village of Strontian (the element Strontium was discovered nearby and named after the place) in the Scottish Highlands, surrounded by wonderful countryside, lived Lawrence Edwards (1913-2004) who, in addition to his job as a biology and mathematics teacher in Edinburgh for 40 years, was engaged in painstaking research on the buds of trees and many other plant species. As part of his work on projective geometry, which he studied with George Adams at the Goetheanum, he was interested in the geometry of the living world. His most important research results are presented in his book The Vortex of Life. He made the fascinating discovery that plant buds undergo rhythmic shape changes in winter, a time when formerly they were assumed to be resting. In all the plants he investigated, these shape changes showed a clear connection with positions of the moon and  planets, and for each plant species a specific planet.

He was also able to demonstrate that each tree (or wood), assigned by Rudolf Steiner to a specific planet for the seven columns of the first Goetheanum, had a relationship with their corresponding planets as regards their bud shape rhythms.

People at the Hiscia Institute for Cancer Research in Arlesheim were able to show by means of Edwards' method that mistletoe berries undergo shape changes corresponding to positions of the moon in the zodiac.

This work by S. Baumgartner and H. Flückiger is now taken up, extended and deepened in the context of a research project at the Goetheanum Research Institute (Glashaus) as a co-operation between the Science Section and the Hiscia Institute, supervised by Prof. Dr. H. P. Heusser at the University of Witten/Herdecke.

The aim is to develop Edwards' work, which hitherto has been largely ignored by the scientific world, in order to make it accessible in wider circles, and secondly, to corroborate the evidence of the moon-zodiac effect on mistletoe, and analyse it in detail. The results enable us to determine the divisions in the sky between the zodiacal constellations. By means of the exact shape change in the mistletoe berry correlated with a particular constellation, it is possible empirically to map the spheres of influence onto the sky, allowing us to re-establish our present divisions of the zodiac in a modern way. 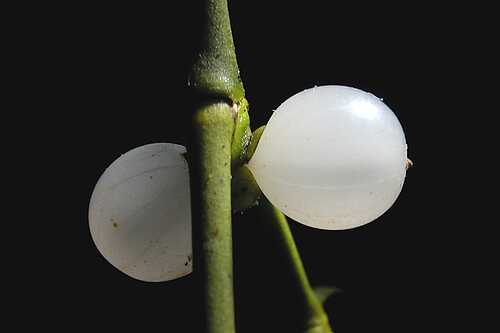