The project on brain physiology and freedom of will could be continued and completed thanks to renewed support from the Mahle Foundation, the Rudolf Steiner Fonds and the Dr. Hauschka Foundation. A publication for “Frontiers of Neuroscience” will soon be ready for submission.

The statistical analysis of the EEG data on the readiness potential (RP) was successfully carried out with the help of a “mixed model” algorithm. This procedure (Laird & Ware, 1982) is tailored to the problem that often arises in studies dealing with different subjects: the change in a variable is observed over time and this is done repeatedly for each subject. Particularly influential and at the same time difficult to objectify is the individual nature of the subjects and their individual performance of the tasks. This subjective factor is included as a “random effect” so that the inter-subjective “actual effects” that are asked for in the experimental design become more visible. In this way, individual differences no longer stand in the way of the question about the significance of inter-subjective effects.

The results of the statistical analysis show that the differences in experimental variants (see Annual Report 2020) only turn out to be significant at less than 250 milliseconds (ms) before the subjectively stated decision point, i.e., much later than the onset of the RP increase. This suggests that anything that takes place earlier has the character of general preparation for an action.

As a method of interpreting the results in terms of the mental correlate of RP, the different RP variants were arranged in a morphological series. The “intentional movement reference” emerged as the decisive factor for the form of the readiness potential (an imagined movement also has a movement reference). The stronger this movement reference, the more pronounced the RP.

Even if the Libet experiment was motivated by the question of freedom and consciousness, our results suggest, instead, that the essential element for the emergence of a RP is the existence of the “intentional movement reference”. But how does an intentional movement impulse arise in us in the first place? This is described by Rudolf Steiner in “Anthroposophy, a Fragment” as a phenomenon connected with the astral body. According to this indication, the impulses for movement are to be sought in the human inner life – by no means always as impulses of the “I-person” but, rather, instinctively as impulses of the “astral human being”. A process takes place that begins with the perception of an image, proves effective in a desire according to the judgement of the “I-person” and then lives on in the actual movement. According to our observations, precisely these processes of image perception and desire are depicted in the slowly increasing RP; in contrast, a neuronal effect of the emerging decision of the “I-person” – for or against an actual movement – only becomes apparent in the last 250 ms before the indicated time of the decision. 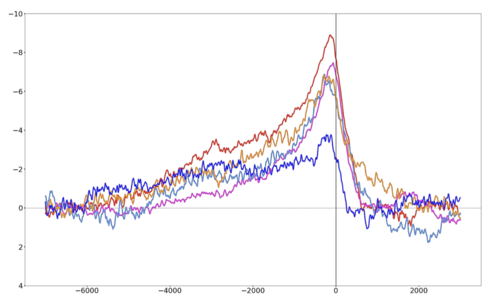 Readiness potentials from different test variants averaged over several subjects. The vertical line at time 0 marks the moment that the subjects indicated as the moment of decision.
Back