Fluorescence excitation spectroscopy was developed as a quality research method by Jürgen Strube in the 1990s. Since then, this method has been applied at the KWALIS gGmbH research institute for various types of samples such as seeds and fruits, but also liquids, such as oils, milk or water. Since 2019, we have been working on the further development of fluorescence excitation spectroscopy and in particular on the construction of a second measuring apparatus in a collaborative project between the KWALIS gGmbH Research Institute and the Research Institute at the Goetheanum. In last year’s annual report, we reported on the construction of the new detection unit. The development of the mechanical construction of the new unit with the creation of CAD models for all components was the main focus in the second year.

Design difficulties arose from design decisions that had been made early on, based on previous experience with the existing plant. These included, in particular, the functional unbundling of the measuring unit and the measuring chamber so that the measuring chamber can be replaced in the future without having to change the measuring unit. The implementation requires spatial configuration of the two detection units with their photomultipliers, the mechanical shutter blades (similar to a camera shutter) and the advanced filter wheels, as well as the sample illumination by light guides with the mechanical shutter blades belonging to them and additional sensors in a measuring head. Since the photomultipliers have to be accommodated in evacuated housings and cooled to temperatures of about -30 oC by a cooling circuit for noise suppression, the spatial construction is densely packed and very demanding.

But we are convinced that this design decision will pay off in the future. Not only will other designs of the measuring chamber be possible, for example for larger samples, but for the first time both photomultipliers will measure the same side of the sample and liquids can be measured on their air side (and not just through a cuvette).

At the moment we are building the system and, in particular, working on the programming. The cooperation with Prof. Dr. Johannes Grebe-Ellis from the University of Wuppertal is helpful as it allows us to manufacture some parts in the workshop of the Physics Institute there. After setting up the system, the main focus will be on programming the control and measurement software, setting up a new database and troubleshooting. The whole system has to be extensively tested and characterised. Furthermore, a very careful modernisation of the first plant is planned. 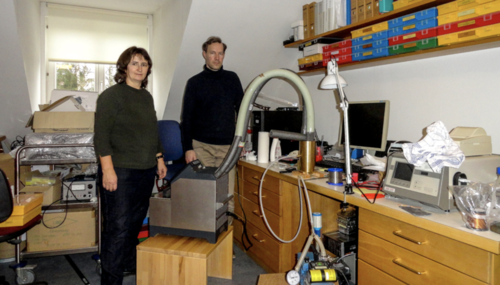 Photomultiplier housing (left) and next to it a part of the inner workings (right). A newly manufactured PMT measuring head (cylinder on the tabletop) in the vacuum and cooling test of the detector interior at -30 degree Celsius. The vacuum pump can be seen on the lower right and the cooling unit with the curved cooling hoses on the left.
Back